From September, 9th  till wednesday September, 11th we had the EuropeanaPhotography plenary meeting in Vilnius, Lithuania, organized by Viktorija Jonkute. The meeting focused on the communication strategy, the preparation of the exhibition, and the MINT mapping tool.

The general progress of the project is fine: we are meeting the digitization and metadata goals, and are ready to publish images to Europeana. We had discussions on Tuesday until late at night on the best concept for the exhibition, both thematically as well as about its concept. One thing however is already crystal clear: we will stun the public with amazing images, silent witnesses to Europe’s history. 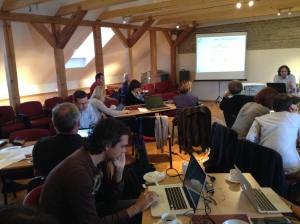 The meeting venue was at the magnificent premises of the Vytautas Kasiulis Art Museum and the Lithuanian Art Museum (LAM). On Tuesday evening, the LAM opened the exhibition “The Elite of Lithuanian State Politics, Culture, Science, Society and its Environment from the second half of the 19th until the early 20th century”. This exhibition was made possible through the EP project, and shows the nascent nation of Litthuania through photographic testimony. At this occasion, we had the opportunity to consult the Lithuanian Integrated Library System http://www.limis.lt/en/pradinis. 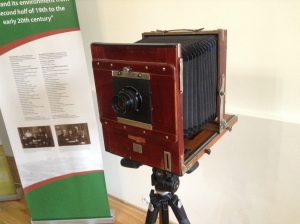 On Wednesday, a conference “Digitisation and Photographic Memory” was held, with contributions by project members. Fred Truyen opened with a reflection on memory versus history, and elaborated on the status of the photographical object and the way we can or should render photographic heritage today, taking into account that with current technology we can disclose much more of the image than was possibly produced at the time of the original. In a deliberate but measured provocation, Fred Truyen showed colourized images from United Archives using the FarbenFrooh technology, a courtesy by Frank Golomb.

Emanuela Sesti of Fondazione Alinari went deeper into the topic  by focussing on best archival practice and creative representation of art. John Bolean of TopFoto blew the audience away with absolutely stunning images from the TopFoto collection digitised for EP. The Lithuanian speakers Danutė
Mukienė, Margarita Matulytė and Stanislovas Žvirgždas concentrated on Lithuania’s national history as documented in photographs and photographic albums, while Anna Grusková (Divadelný ústav) spoke about “The Secret of Theatre to be Discovered in Old Photographs”.

Antonella Fresa (Promoter), the technical coordinator of EP, concluded with a talk on “The creative re-use of digital cultural content”.

To conclude the meeting, we were kindly invited to a trip towards the Kernavé Archaeological site, birthplace of human presence in Lithuania; an absolutely thrilling experience with breathtaking UNESCO protected landscape and a very innovative archaeological museum. View some more photos on Facebook.

Responsible for Digital Media at the Institute for Cultural Studies KULeuven. Teaches Information Science and Online Publishing.
View all posts by fredtruyen →
This entry was posted in Digital Humanities, Europeana, Uncategorized. Bookmark the permalink.