Early Photography and the Digital World 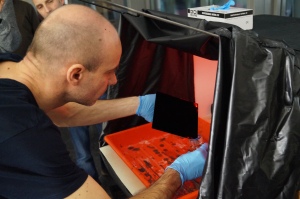 There is unmistakenly a boom in the rediscovery of early photography these days, not only with several exhibitions taking place, such as “Salt and Silver“, in  Tate Britain, and the travelling exhibition “All our Yesterdays“, now in Copenhagen,  but also with amateurs and photographers delving in this niche market, making portraits with wet collodion techniques, both tintypes and glass plates.

With the ubiquity of smartphone photography, people are looking for a deeper photographic experience and what is better suited than an image slowly appearing on the glass? Early photography seems to align with a deeper “vintage” revival, where old techniques are rediscovered and cherished for their often specific imperfections, in a quest for “authentic experiences”. We see this with the revival of the vinyl phonograph, the reel-to-reel tape recorders, the polaroid photo etc. It all seems related to the feeling that the digital commodifies everything, that it also “flattens” out all relevant differences and transforms them to one, uniform and narrowband, essentially boring, information stream.

Of course, some criticism against this retro movement is appropriate: one can debate whether this nostalgia is really leading to more authentic experiences, or whether it is not again a commercialising of trendy lifestyles rather than a genuine quest for lost realities. One could hold that this revival is rather a burial party, at the very moment we realize that the digital era irreversibly leaves behind the analog world as we knew it, we seem to gather a last time around these techniques, cherishing our golden memories. Many theoreticians of photographic art are inclined to see no real innovation into this essentially nostalgic movement, and are more eager to learn how the digital will evolve photography truly as an art.

Well, I think we are judging to fast. I think there is more to the revival of early photographic techniques than simply nostalgia. This misconception, that the analog is just a thing of the past, stems from a misunderstanding of digitization, as I will try to explain. While you can take any picture you like with a smartphone, this of course in itself does not really amount to a proper digitization of an analog object. When we digitize old photographs, eg, many issues come to mind. The first one is: which original? Imagine well known photos published in magazines that went around the globe, being reprinted all over. It can be quite a challenge to know from which original the first widespread reproduction was made. Was it from a print? Or from a (glass) negative? Suppose that you have both, are you going to reproduce the print or use the negative? From a digitization point of view, there are many arguments to choose the negative. And this is what we did for very large projects such as EuropeanaPhotography.

You will quickly discover that a photographer might have had many negatives of the same “photo” to choose from, certainly in the age of nitro celluloid film and beyond. But that is not the only issue. With current techniques, it is possible to retrieve a much “fuller” image from the negative than with old print techniques, such as an albumen contact print or a calotype positive. So you might render a photo experience of a much higher quality than  the photo that at that moment in history became famous. Again, this is exactly what we did in EuropeanaPhotography: we used digitization processes very akin to High Dynamic Range techniques to get the fullest dynamic range possible out of the negative.

But it doesn’t stop there. It is quite naive to think that you can digitize any old photo technique in the same way. Well, yes you can, but the accuracy of your digital representation will be hugely different, even at the same level of digital precision, eg at the same resolution, color space and depth. Look at the two images below:

The first image is obtained from a silver gelatin glassplate, captured through backlight on a lightbox, the second is a tintype, for which backlighting is simply not an option. The latter has been captured using floodlight. Whereas it is possible to obtain a very high dynamic range with the first technique, it is very difficult to do justice to the tintype photo without using reflective imaging techniques, since a tintype object has very different properties compared with a glass plate in the way it lets through or reflects light. When we would show such images in a print exhibition, the first would look certainly better than a possible original print, the second would most certainly look very inferior to the original metal object. So, different digitization processes are needed to render different analog techniques, and the same state of the art doesn’t allow you to visualize the photos at the same standard. It was one of the reasons we predominantly showed silver gelatin dry plates at the “All our yesterdays” exhibition. We could render those at breathtaking quality, which we never could do with say a daguerreotype or tintype.

For a metal plate photo, we would need a rendering that allows to look at the image from different angles, so as to see the object in its true complexity. So digitizing it and showing it on screen or on print will not do justice to this particular photographic object. The mistake is to think the digital image is a representation of the original photo and its properties. It never is. It is a rendering of the information obtained from the original bearer. It are two distinct processes: the serialization to obtain the digital master, which contains the image information, and the rendering of a representation, a visualisation. The latter can be on screen, on print, even projected onto clouds. The rendering algorithms can evolve independently from the serialization. So a visualisation of a jpeg file in a few years might be superior to what we are able to show now. There is still a lot of evolution possible in the way the popular industry standard JPEG can evolve to better represent early photographic images.

The point is, the “original” is also a rendering of the photo. By other means. Captured in an analog, continuous medium. So the digital master is a representation, a model, of what is represented by the original (series of) photo(s). This model is always an approximation, it is not a one-to-one copy. The digital master itself will never be a “clone” of the original photographic object – it just holds the information -, and we are still very far from the day in which the digital master will allow us to reproduce a clone from the original daguerreotype, tintype or even silver gelatine glass plate. In this sense the daguerreotype still remains a unique object. So part of the reason analog photography isn’t dead, is not so much nostalgia, but the simple fact we did not yet manage to serialize it properly yet.

Of course this sounds like a futile remark: we are using digital master files every day to reproduce pictures in very good quality. This occurs millions of times a day by millions of users. So the digital has reached a point where the “undigitized”, the rest fragment that is not captured or rendered in the digital reproduction is so marginal that it is beyond the discriminatory powers in our daily practices.

But that doesn’t change that the analog experience is and stays also very different than the one mediated by digitization. Holding a daguerreotype in the hand, this beautiful, reflecting metal object in a glass frame, is and stays far from the experience offered by mediation of the digital master. But on the other hand, the digital master allows for visualisations to explore new avenues, new materials, new bearers, new formats. We, eg., showed the mostly 5×4″ photos in a much larger, more than 30″ wide format, on high contrast paper.

By separating the digitization process from the rendering, we can develop freely our rendering approaches and do things with early photography that have never been seen before. E.g. we can make multiple shots from a silver gelatine glass plate, creating a HDR image that renders the dynamic range of the negative to its fullest potential. Today, we can then render these images on screen or paper with a quality that was never seen before.

Photography definitely and irrevocably took a digital turn. The digital native is the present and future of photography. Yet our knowledge of the analog world is not yet complete, and there are still many things to do in digitization of early photographic heritage. The quest to understand the magic of chemistry and optics as it was exemplified from the very beginnings in photographic techniques as distinct as the daguerreotype and calotype hasn’t ended, and still hides an unexplored treasure trove.

Photoconsortium has the goal and ambition to explore this knowledge, to go beyond the current state-of-the-art in digitizing early photographic techniques.

Responsible for Digital Media at the Institute for Cultural Studies KULeuven. Teaches Information Science and Online Publishing.
View all posts by fredtruyen →
This entry was posted in Europeana. Bookmark the permalink.
Loading Comments...